Signs and Symptoms of Cardiovascular Disease 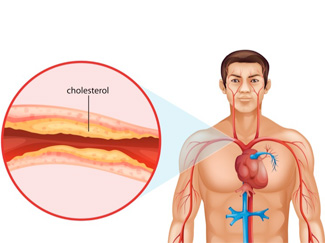 Find out if you are at risk - get tested

Hypercholesterolemia (high LDL-cholesterol levels) and hyperlipoproteinemia type III can often go undiagnosed until serious health issues arise. However, if an early diagnosis is made, and appropriate treatments begin and lifestyles changes are made, the risk of serious complications decreases significantly.

These are the symptoms that occur over extended periods and often go undetected until further complications occur. Elevated cholesterol levels may be detected earlier by getting routine checks of cholesterol levels, especially in older people who are at higher risk. If these high cholesterol levels are not detected or treated, fatty deposits build up inside the blood vessels, resulting in the formation of plaques that damage and decrease the diameter of the blood vessels. These plaques cause hardening of the arteries known as atherosclerosis and blood clots often form in these narrowed blood vessels.

The atherosclerosis can severely decrease blood flow to certain tissues, and this is when individuals start to feel the affects of the high cholesterol and triglyceride levels. Peripheral vascular disease occurs when a blood vessel is severely restricted in an arm, leg or organs below the stomach. This causes extreme pain and cramping in the affected area, and can lead to ulcers, gangrene and other infections. If the blood flow restriction occurs in the chest area, angina (chest pain) occurs. This pain is felt as a squeezing, suffocating or burning feeling. Although angina is not a heart attack, it is a warning sign of an increased risk of a heart attack and immediate medical attention should be received.

If the atherosclerosis and associated blood clot occur in one of the blood vessels in the heart, the blood flow can be completely blocked. This is what occurs during a myocardial infarction (heart attack). The heart tissue usually supplied by the blocked blood vessel suddenly loses its blood and oxygen supply and can quickly die if the blockage is not removed. The severity of the heart attack depends on which blood vessel has been blocked. If the blockage occurs in a main coronary artery, a large area of heart tissue will be affected and a more serious heart attack occurs, with more severe consequences. If a smaller artery is blocked, less tissue damage occurs and the expected recovery is less complicated.

Heart attacks require immediate medical attention and no one should “tough-out” a heart attack. The most common symptom of a heart attack is chest pain, which may extend to other upper body areas (shoulders, arms, back, neck etc.). Some people experience severe unexplained pain in the upper body but not actually experience any chest pain. Other symptoms include stomach pain, nausea, shortness of breath, anxiety, sweating and dizziness. Often the symptoms are only mild to start, but if there is any suspicion of a heart attack, immediate medical attention is essential to minimize further complications.

If a blood vessel within the brain or supplying blood to the brain is blocked due to atherosclerosis and a blood clot, an atherothrombotic stroke occurs. Alternatively, a piece of plaque or blood clot can break loose from an atherosclerotic vessel in another part of the body and travel to the brain and cause a blockage in a blood vessel in the brain. This is known as a cerebral embolism. Both stroke types result in the death of brain tissue in the regions lacking a blood and oxygen supply due to the blood vessel blockage. Further brain damage (often after the stroke has occurred) can also occur due the excessive accumulation of fluid in the brain, known as cerebral edema.

Immediate medical attention is essential for any indications of a stroke. The signs of a stroke occur very suddenly. They include a numbness or weakness in the face or body, (especially on one side), confusion and trouble understanding or speaking, difficulty seeing out of one or both eyes, dizziness, loss of balance and a severe headache. Not everyone will suffer from all of these symptoms, but if there is any possibility of a stroke, immediate medical attention must be received.

Next, Diagnosis of Cardiovascular Disease »